Currently, the milk is provided by around 60 members from within a 60km radius of Echiré.
Once the cream arrives at the butter factory, it is matured for a total of 18 hours, thus creating the unique flavour and personality of Echiré butter.
The butter is then produced teak barrel-type churns using ancient expertise.
The cream churning lasts for two and a half hours, and this slow transformation of the cream into butter gives it a soft and tender texture, as well as a bold hazelnut flavour, an elegant taste which is characteristic of Echiré butter. The entire production process of Echiré butter is overseen by a master butter maker.

Our dairy was founded in 1891 by Mr. du Dresnay in the outhouses of a building situated on the banks of the Sèvre Niortaise River, right in the heart of the village. The dairy became a cooperative in 1894. The spring which supplied the municipal wash house also supported the needs of the dairy and ever since its foundation, the dairy has been solely dedicated to producing butter renowned for its quality.
Since the very beginning, the butter has always been manufactured in teak barrel-type churns, giving it a unique texture. 22 litres of milk are required to make one kilogram of butter.
Our butter is used first and foremost by gourmet restaurants and luxury hotels. Indeed, most starred restaurants featured in restaurant guides offer their customers the opportunity to discover Echiré butter by using it in their recipes or by having it on out on their tables. The famous Echiré is also sold in high-end delicatessens in Paris, New York, Los Angeles and Tokyo.

The Joining of Sèvre & Belle and Echiré Cooperatives 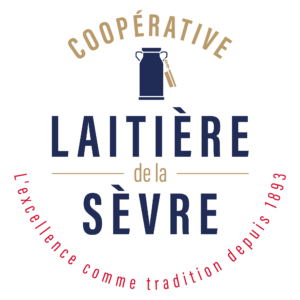 In 1997, the producers of Echiré and Sèvre & Belle, a cheesemaker for over 100 years renowned globally for the quality of its cheese, decided to combine their energy in order to create the Quality Charter for Milk Production (la Charte de Qualité de Production du Lait). This is an attempt, most notably, to tighten food security and to better respect animals, but it also aims to create a more positive image of the agricultural industry. More than anything, however, it is largely thanks to its respect for the environment and its commitment to transparency for consumers that the Cooperative is firmly dedicated to ensuring the absence of GMOs in animal feed.
The end of 2004 saw the merger of La Laiterie Coopérative d’Echiré et la Coopérative Sèvre & Belle, giving rise to La Coopérative Laitière de la Sèvre.

With 65 cows milk and 55 goats milk producing partners, our close-knit cooperative collects all of our 100% non-GMO milk from within a 50km radius. All of our producers are committed to producing 100% non-GMO milk, thanks to the healthy and 100% verified non-GMO food which they give to their animals. The respect we demonstrate towards our animals is essential to guarantee the quality of both our milk and our other products.

What is the IFS?

IFS certification was implemented in 2013 in Echiré, it certifies the production of our AOP Charentes- Poitou unsalted and lightly-salted butter in “plaquettes”, “mottes”, “cubes”, “rouleaux” and the manufacture of pasteurized cream packaged in pots and plastic buckets.

Since 1979, Charentes-Potiou butter has enjoyed Appellation d’Origine Contrôlée status, which later became Appellation d’Origine Protégée in 1992. This enables consumers to find products which are made according to specific regulations. It also recognises the products’ origins and their production methods, as well as ensuring that it preserves the unique flavours of a particular region.

Echiré : The butter made for only the best!

For a number of years, the best restaurants and both international and nation palaces used out butters to produce high-quality dishes and pastries.

Our AOP Charentes-Poitou butter is internationally renowned for its quality, taste and light texture. For these reasons, it was awarded the Excellence Française prize in November 2015. Our AOP Echiré butter is available in 29 countries on 5 continents, including in two stores – “Maison du Beurre” in Tokyo and “Marché au Beurre” Osaka.

We use cookies on our website to give you the most relevant experience by remembering your preferences and repeat visits. By clicking “Accept”, you consent to the use of ALL the cookies.
Cookie settings ACCEPT REJECT
Manage consent

This website uses cookies to improve your experience while you navigate through the website. Out of these, the cookies that are categorized as necessary are stored on your browser as they are essential for the working of basic functionalities of the website. We also use third-party cookies that help us analyze and understand how you use this website. These cookies will be stored in your browser only with your consent. You also have the option to opt-out of these cookies. But opting out of some of these cookies may affect your browsing experience.
Functional
Functional cookies help to perform certain functionalities like sharing the content of the website on social media platforms, collect feedbacks, and other third-party features.
Performance
Performance cookies are used to understand and analyze the key performance indexes of the website which helps in delivering a better user experience for the visitors.
Analytics
Analytical cookies are used to understand how visitors interact with the website. These cookies help provide information on metrics the number of visitors, bounce rate, traffic source, etc.
Advertisement
Advertisement cookies are used to provide visitors with relevant ads and marketing campaigns. These cookies track visitors across websites and collect information to provide customized ads.
Others
Other uncategorized cookies are those that are being analyzed and have not been classified into a category as yet.
Necessary
Necessary cookies are absolutely essential for the website to function properly. These cookies ensure basic functionalities and security features of the website, anonymously.
Save & Accept